There’s one travel truth I should have learned by now: if you plan an inflexible itinerary something will always happen to put a kink in it. Dale and I only had a 10 day layover in Sabah, so upon arriving in the capital city of Kota Kinabalu we planned to make the most efficient use of our time by booking a series of discounted, non-refundable tours.  Included was a scuba dive lodging & meal package on the island resort of Sipidan, reservations at a jungle lodge to visit a orangutan rehabilitation center, and  permits to climb Mt. Kinabalu, a 13,000 foot volcano.  I knew it would be a grueling schedule even under ideal circumstances, but certainly hadn’t planned on the additional challenges of getting Dengue Fever, a scratched cornea, a cold, and my toenail falling off!

My misfortune began our first evening in Sabah.  After finishing our bookings, I began to feel queasy and tried to go to sleep early. That night I was surprised by how quickly & violently tropical illnesses take root. By 2 a.m. it was undeniable that the horrible throbbing in my head and aching of my body wasn’t just caused by the loud music vibrating our hostel room from the karaoke bar below. At first I thought I was coming down with a nasty case of the flu, but I had to admit my symptoms matched the definition of Dengue fever stated in the Lonely Planet’s “Healthy Travel Asia” book:

“The illness usually starts quite suddenly with fever, headache, nausea and vomiting, and joint and muscle pains. The aches and pains can be severe…and many travelers report experiencing extreme tiredness with muscle wasting and lack of energy for several weeks…”

Those pesky mosquito bites I got in Manila turned out to be more of a pain than I ever imagined.

I was determined to regain my health quickly since our tours couldn’t be postponed for long.. After two days rest I convinced myself I was on the mend when the second incident happened. I woke in the middle of the night, this time to a piercing pain in my eye – debris had slipped under my contact and scratched my cornea. When we really couldn’t delay our trip to Sipidan any longer Dale led me, a weak hobbling ‘pirate’ with a patch over my eye, on our long journey to the island. 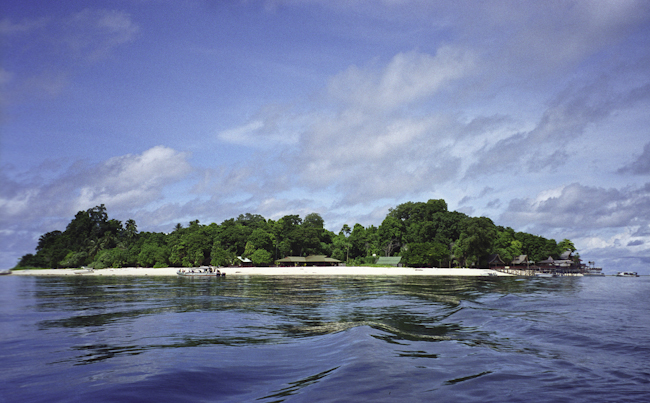 Scuba divers have voted Sipidan as “the best beach dive in the world” and we agree. Only 45 feet from shore the reef drops off dramatically from 9 to 90 feet. From the Borneo Diver’s pier you can sit and watch sharks and turtles lazily swim through the clear shallow water covering the reef directly underneath. After another day of rest I was well enough to join Dale on a few of the boat dives and was not disappointed for my efforts. The most unusual aspect of these dives was the amazing amount of turtles we saw on a consistent basis. They often allowed us to approach closely; we were dwarfed by their size and amazed how gracefully an 80-year-old specimen could swim. 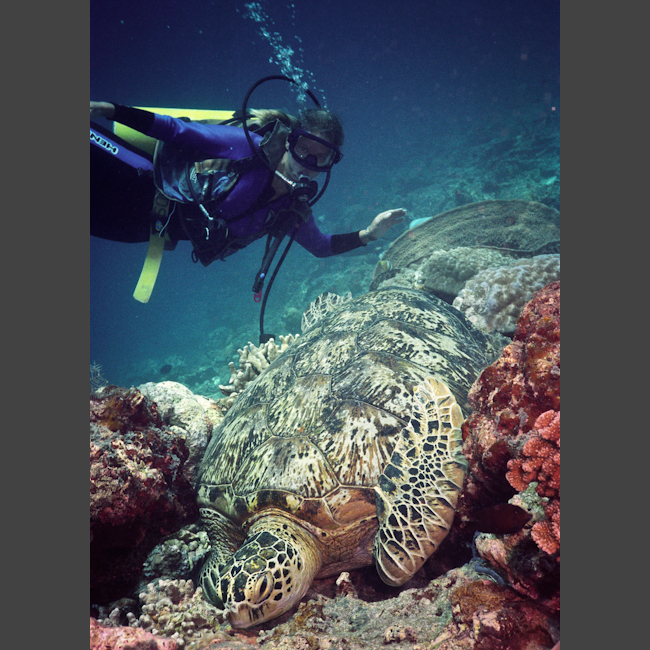 Back on Borneo, traveling up the eastern Sabah coastline proved to be another adventure. No deluxe air-conditioned buses were available so we rode as the locals do – on a converted minivan. Its original seats had been stripped and replaced with rows of closely placed benches. Our vehicle, which regularly seated six passengers, was crammed with 12 adults and 6 kids. Luckily our large backpacks were allowed on since they provided extra seats in the isle. Besides the occasional screams from the babies and men who constantly puffed away on their cigarettes, everyone was amazingly calm – even we managed to stay still squeezed in our tiny space like accordions.

Upon reaching our next destination we were relieved to discover the room we pre-booked was in a quiet, spacious lodge at the edge of the jungle. The orangutan feeding platform at the rehabilitation center was a pleasant fifteen-minute walk through virgin forest. By the afternoon the tour buses had departed leaving more orangutans than people in the preserve. Two friendly male orangutans found Dale especially entertaining. Although we tried not to disturb them in their habitat they quickly approached us and attached themselves to Dale like a long lost relative. 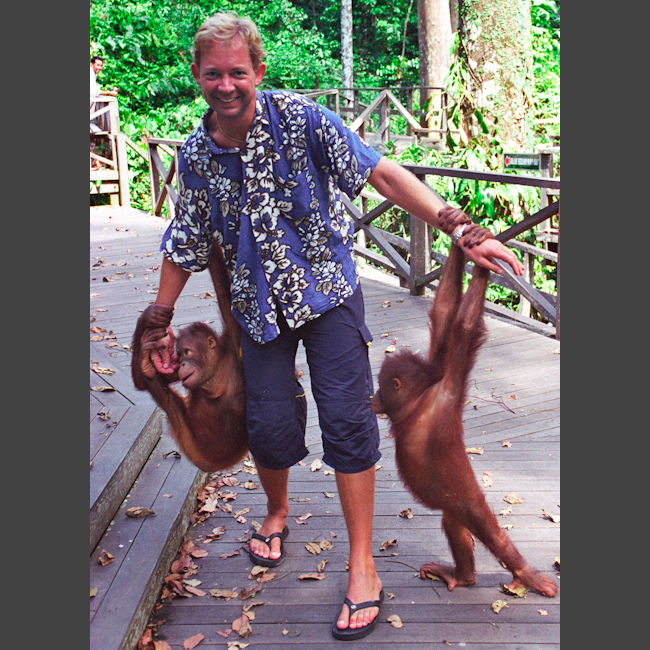 Two baby Orangutans jumped the fence and attached themselves to Dale

By the time we reached Mt. Kinabalu I’d regained my health if not my strength. Since climbing this volcano is the number one tourist attraction in Sabah, I thought, “How hard can it be?” At our dorm room in the hostel we met other like-minded hikers and decided to team up with four of them to share the cost of the required guide.  We woke early the next morning to prepare for a long days. It was distinctively cooler at the base of the mountain (3,000 feet elevation), so we dressed in pants, long sleeved shirts, and wore shoes for the first time in five months. Although my nose began to dribble with this sudden climate change we welcomed the cool air since we began to sweat just 15 minutes into the hike. The first day of hiking was all uphill, ascending 6,000 feet through sub tropic, temperate, and alpine regions. The trail was well trodden with occasional handrails and 2,500 man made steps spaced along the more difficult sections, but I couldn’t help but think, “This is the Stairmaster from hell!”

Harry, our patient Malaysian guide, was required to stay with the slowest member of the group (me) and Dale kept the same pace weighed down with carrying both our daily supplies in one pack. Six hours after beginning we struggled into the mid mountain lodge, our final destination for the day. We collapsed in the dining room, drank hot tea, and enjoyed impressive views as mist drifted apart to reveal glimpses of the valley far below and imposing granite towers near the summit. Not only could I barely move, but also I regrettably resigned myself to acknowledging – you guessed it – that I was sick again, this time with a cold.

For the non-acclimatized it is difficult to sleep at high elevations. We arose the next morning at 2 a.m. after a night of restless sleep to continue up to the summit in time to watch the sunrise. The final 4,000 feet was by far the steepest and most treacherous section of the trail and we climbed with just our headlamps and the full moon to illuminate the way. Dale was doubtful that I would make it to the top in my condition, and I’m sure Harry agreed but was too polite to say anything. When we reached a section of seemingly endless granite boulders so sheer that we had to grab ropes bolted to the rock in order to scramble up their faces, I began to wonder myself if I’d succeed. At 5 am we reached the top of a peak that allowed us to finally see the summit above – that view was the inspiration I needed. By 5:45 a.m. we reached the summit just in time to watch a spectacular sunrise. 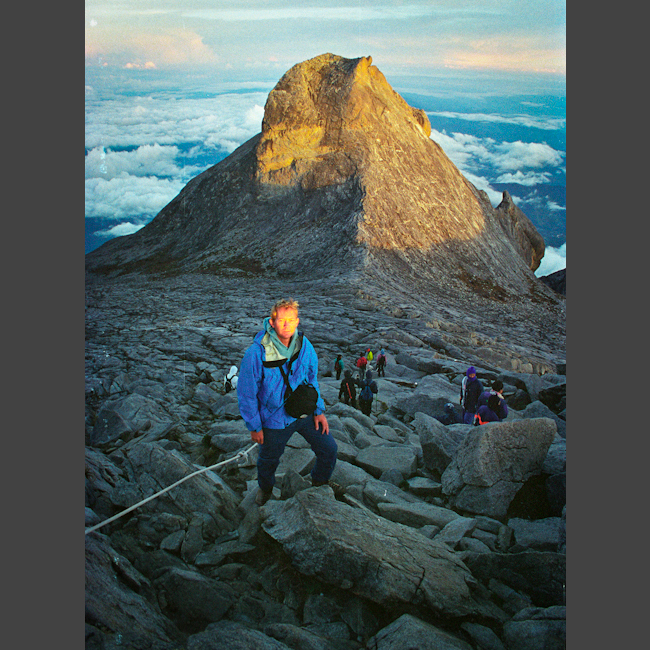 Most people believe that climbing down a mountain is far easier than going up, but I had my reservations about descending 10,000 feet with my already wobbly legs. We stopped for a hearty breakfast back at the mid mountain lodge at 9 a.m., grabbed our pack, and continued down. Marathon athletes compete in an eco-challenge race every September, jogging up and running down this volcano trail to complete the entire circuit as quickly as two hours forty-five minutes. For us, it took nearly as long to descend as ascend.

For the last three hours we walked in a complete downpour, and when the trail transformed into a muddy river it didn’t help quicken our progress. By the time we reached the bottom our leg muscles were like spaghetti and we couldn’t bare the sight of any steps, up or down! I lost one toenail, and Dale lost two along with his desire to hike anything else for the rest of our trip. Myself? I think our toenails will grow back by October, just in time to see what the Himalayas might have in store for us.