After Sixty hours of strenuous travel that began when we left Huahine in French Polynesia, we finally arrived in Fiji and it’s capital city of Nadi.   Now we had to think clearly and make arrangements for our three-week stay, though the lack of sleep sure made this challenging! We decided to visit two areas of Fiji. The first: Kadavu Island, well known for scuba diving and authentic village life. The second: Yasawa Islands, famous for its sunshine and beautiful beaches.

It’s a shame that people have been frightened away from Fiji because of its recent political coups. The Fijians are some of the most laid back, friendly, and hospitable people we’ve encountered in our travels, and the ‘unrest’ has had no effect for visitors other than to decrease tourism by 60% during the last year. It’s a budget travelers dream, visit now – get off the beaten track and you’ll find deals everywhere and space plentiful in your own private slice of paradise.

We were able to arrange an inexpensive flight to Kadavu just a few hours after we arrived in Fiji.  A scenic one-hour small plane flight that brought us to a small dirt landing strip; luckily, we had called ahead to arrange our transfer to Ono Island since it was a one-hour outboard boat ride to Jona’s Paradise – our home for the next eight days. 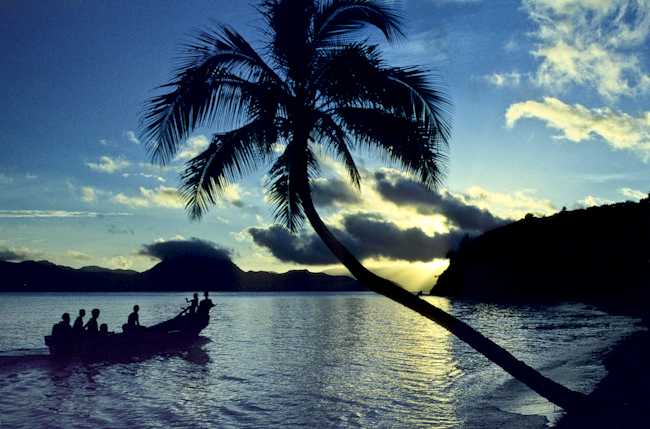 At Jona’s we quickly adjusted to the relaxed Fijian style and started getting to know the locals. Maggie, the resort manager, was quite the character. His flamboyant gay demeanor was very disarming; he would constantly have us laughing at his comments of affection towards other male members of the Fijian staff. The interesting thing was that no one took offence and often played up the teasing from Maggie. It was hard to not smile when seeing a Fijian dressed in a colorful flowered sulu & matching shirt wearing lipstick!

Philippe, our scuba dive master, who dove over 3500 times in Fiji and knew the surrounding reefs better than anyone. Our dives included spectacular sunlit canyons, abundant fish, sharks, large sea snakes, and beautiful soft corals. Jona, owner of our resort, is known as the best fisherman in Kadavu & provided fresh fish for our lunches and dinners (we discovered the other resorts in Fiji were not eating fish due to the difficulty of catching them during the rainy season). Fresh fish combined with garden fresh vegetables, fruit, home-baked bread and Fiji Bitter Beer helped us stay fed and happy. 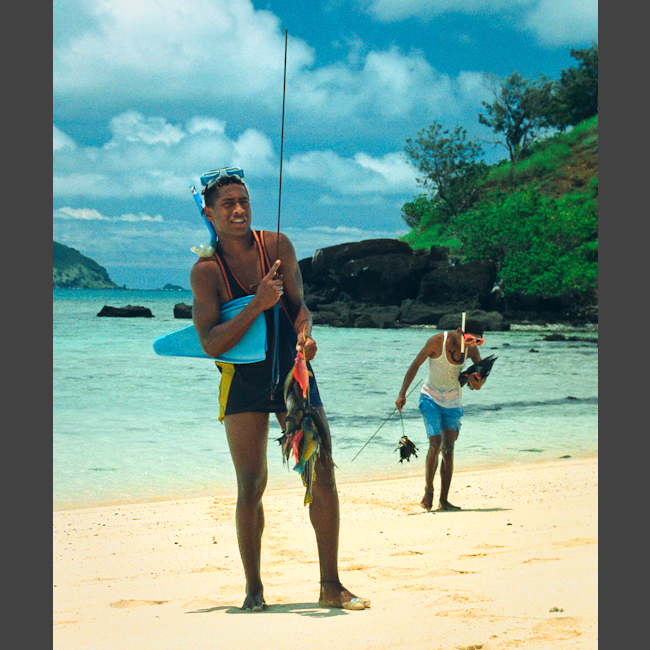 After a couple of nights of rain, Lindua (Jona’s wife) insisted that we move into one of the bures (thatched hut). The price wasn’t in our budget but refusal of her offer would have been an insult, so a comfy bed with mosquito netting was a nice change from our steamy tent. Best of all, Lindua didn’t charge us a higher rate.

Most evenings we sat on grass mats with villagers and drank kava – a Fijian institution. Beginning as early as 3pm we heard the familiar thump of kava roots being pounded into powder. Kava looks and tastes like muddy water – even the Fijians sometimes make sour faces while drinking a bowl. So why drink kava? It’s a cheap and plentiful mild sedative that numbs your mouth and insures a good night sleep. More importantly, kava brings you together with the Fijians for formal ceremonies and casual social scenes (like going the neighborhood pub).

During our eight days in Kadavu, we became familiar figures in many different villages and we were always greeted with a heart-felt “Bula”! Numerous other Fijians made us feel welcome and our temporary adopted family included us in their daily life of church, school concerts, village visits, and the local ‘store’.

We had the fortunate opportunity to join our Fijian hosts at the village school Christmas concert. 88 kids sang, danced, and performed skits, which the locals found very entertaining. It was interesting to spend a day in a Fijian village and we learned just how friendly Fijian kids were by taking their photo. As soon as our camera came out of the case, the kids came out of the woodwork – it only took 30 seconds for a mob scene of about 50 kids to develop.

As we motored away from the island to the airport, the heavy rain and choppy seas couldn’t wash away the smiles from our faces while the entire staff waved goodbye. Many of the prominent island locals thanked us for coming to Fiji and for our genuine interest in their culture. Small things like that is what we remember and miss most of all. Jona’s Paradise was exactly what the name says. 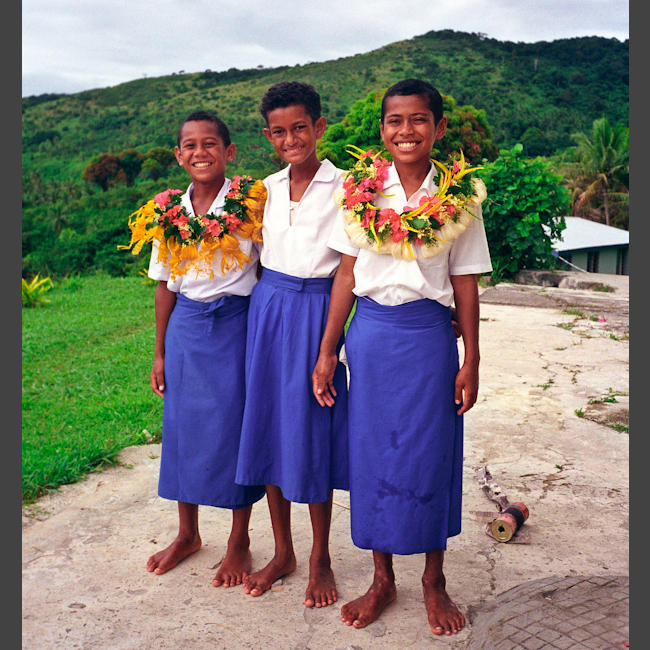 We chose to spend our last two weeks in Fiji in the beautiful Yasawas, the island group where we spent our honeymoon. We flew on the Turtle Airways seaplane and hoped for a chance to stop off at Turtle Island (we thought it would be great to show our faces and worry the staff that the over-active Americans had returned for a second honeymoon). Unfortunately, we found that it would have been easier to get inside Buckingham Palace than to set foot on this exclusive resort. The ultimate torture for us was that from where we stayed on a neighboring island, we could see and almost swim to Turtle Island.

Our first stop, David’s Place, was a big let down compared to Jona’s Paradise. The resort was in need of a face-lift and beach clean up. However our bure was nice and located on the beach with cool breezes, so we decided to stay for a few days and dive with the local scuba dive operation. We quickly discovered that the dive shop, Westside Divers (Westside@is.com.fi), was top notch; new equipment, beautiful fast boats, great service, and small dive groups (averaging 4 people).

One day after diving, we dropped off a diver at a nearby white sandy beach on a new resort (opened Sept 8, 2000). The guys at the dive shop guys told us that this resort was called Oarsman Bay Lodge and was associated with Turtle Island. With a quick radio call and some fast arrangements, we reserved a spot at Oarsmans Bay Lodge.  We arrived to a tradtional Fijian greeting on the beach (singing the same song we heard arriving at Turtle Island five years ago) & we smiled about our luck of stumbling across this wonderful place. Our bure was perfect – airy, tons of windows with fine mosquito mesh screens, and our own bathroom with hot water showers – oh what luxury!

Yasawas means ‘the sunny islands’, so we were expecting clear blue skies and starlit nights…instead we got “rain, rain, rain!”. No matter, we had a great time with the Fijians. When the sun did appear we made the most of it. I floated on the turquoise waters while Dale tried surfing on the free kayaks provided. The Fijians were very entertained by Dale’s attempts to surf – he received constant ‘encouragement’ from the shore along with laughter when he crashed. Small sailboats were also available, so we tried our hand at navigating the craft in moderate winds. After watching us take a few laps across the lagoon one of the Fijians decided to go for a ride with Dale.  After only a few minutes of sailing across the lagoon the Fijian suddenly jumped out of the boat and swam to shore (maybe Dale’s sailing skills weren’t quite perfected yet).

On full moon large, sharp-clawed crabs ran across the sandy lounge area of the resort to deposit their eggs in the ocean.  Even though they aggressively defend themselves Dale caught several which the Fijians cooked up for a tasty treat. Our last day we bushwhacked our way up the highest peak on our island, which overlooked Oarsman’s Bay Lodge & the surrounding Yasawa Islands.

After enjoying three fun, relaxing weeks in Fiji, sadly it was time to leave. Mode, vinaka vaka Levu (goodbye and thank you very much) Fiji, we’ll be back!