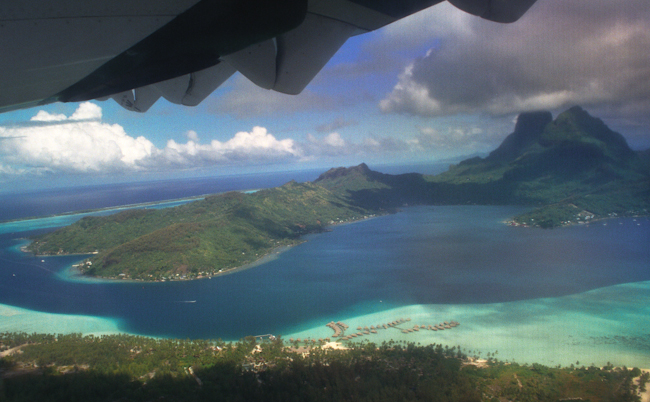 Ten hours after leaving L.A., our flight arrived in Tahiti – 2am local time. We were greeted with a tiare (a fragrant white flower with a yellow center) to wear behind our ear, and our passports were quickly stamped. Now we had several hours to kill before the inexpensive public transport began, so we hung out in the airport cafe and met other budget travelers.  Jay, a fellow traveler and a surfer from England with long blonde dreadlocks, seemed to know what he was doing, so we asked him for directions to the local bus to Papeete.  He was headed in the opposite direction, but spontaneously decided to change his plans in order to join us.

At 6am, we hopped on ‘le truck’ with Jay & two Swedish girls, the only other people on the bus who spoke English.  After a 15-minute ride, we arrived in Papeete, the capital of French Polynesia and also the main transportation hub to the surrounding islands. Everyone congregated around the central marketplace, which was full of fresh fruit, snacks, and local art – we enjoyed a baguette egg and ham sandwich and planned our first day.

We hadn’t worried about traveling around the Society Islands since most guidebooks said it was “no problem” booking the fast catamaran boats. Unfortunately, when we arrived at the harbor we learned from the fishermen that all the fast boats were ‘kaput’. So we went with the flow and decided to take a ferry to Moorea, the nearest island, and figure everything else out later.

We found the best spot on Moorea to camp, Chez Nelson, and set up our tent on the beach right next to the ocean (we enjoyed using Club Med’s facilities just a 100 yards down the beach).

With the communal kitchen, bathrooms, and friendly atmosphere, we quickly became acquainted with our fellow travelers. Jay, who has been traveling and working around the world for the last six years, has a relaxed demeanor and outlook on traveling that helped us begin our journey in the right frame of mind. He pitched his tent and hammock next to us, and together we enjoyed much of our time just relaxing. We often cooked our meals together and sat around afterwards comparing travel stories. A few times just the two of us ate alone at nearby restaurants: the creperie was a good breakfast stop, and on Halloween night we sat outside at the Hibiscus restaurant enjoying fresh fish and a spectacular lightning show. The storms were dramatic & the rain was surprisingly frequent and torrential; trying to dry out in this warm and humid weather was unfortunately a downside of camping.

Once we figured out the logistics of traveling (lodging, transportation, and food), we had free time to enjoy activities. Since we spent most of our budget on necessities, which oftentimes were outrageously priced ($17 for a bottle of sunscreen), we had to find creative ways to get the most bang for our buck.  Our big splurge was for a humpback whale island tour with Dr. Poole, a renowned marine biologist.  We were fortunate to spend about 30 minutes watching a mother and baby humpback play at the surface.  Other activities on Moorea included morning yoga sessions on the beach.  Dale & I became ‘instructors’ and taught Jay and the two Swedish girls a few basic routines while the rest of the camp watched and laughed. Dale also became known as ‘gadget’ man – our water filter was a big hit since tap water wasn’t safe to drink and bottled water was extremely expensive.  After four relaxing days on Moorea it was time to move on – we decided against taking the slow ferry (18 hours) and flew (45 minutes) to one of the outermost of the Society Islands, Bora Bora. 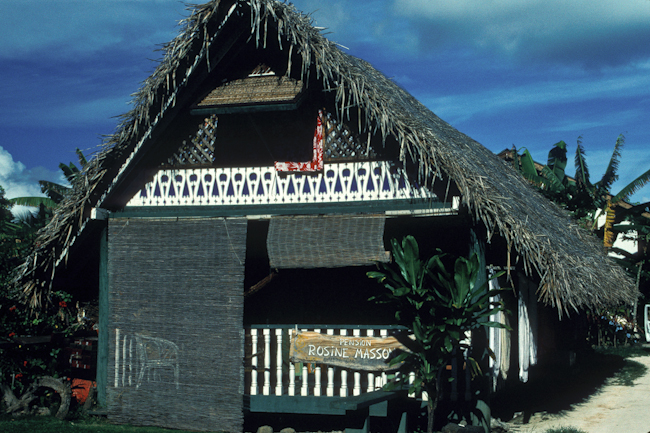 We stayed for 7 nights in Bora Bora at Chez Rosine Masson pension – the best value for our money ($50 a night vs. $500 a night for the over the water bungalows of the luxury resorts just down the beach). Our small room in this house was clean and fairly quiet (except when the roosters crowed, which seems to be the 4:30 am alarm clock for all of French Polynesia).

Sharing accommodations in close quarters allowed us to spend time with several interesting travelers. Stacy and Charles, who we met in the airport in Tahiti, are a younger and more energetic version of us on a much tighter budget (they ate a lot of pasta and baguettes!). We were amused by stories of their daily excursions, such as their determination to bushwhack their own trail through the jungle to the mountaintops, and especially the ‘frisky’ stingray that swam up Charles’ shorts. They had a great method of deciding who gets to do which jobs – rock, paper, scissors – a tip we began using ourselves.

Another interesting couple was Nicolas and Lucy, newlyweds on their honeymoon, maintained a crazy lust for life and numerous contacts around the island.  Nicolas often sang to himself around the house and loved to swim in the ocean during huge rainstorms. He was the test pilot for the household bicycles, which are no longer available for rent because of his big crash (the chain fell off). Most importantly he knew the police and fire chiefs who he used as his own personal taxi service and which also provided us with free rides. His connections even extended to the local fishermen who brought a huge 30 lb yellow fin tuna to our house; for several nights the entire household ate fresh sashimi and tuna steaks. We enjoyed his wonderful crepes, which were creatively made with beer in the batter and survived his potent drinks made mostly with rum soaked in fresh cut fruit.

It’s easiest to appreciate Bora Bora’s unique beauty by viewing the island from a tour on a motorized outrigger canoe.   Reefs circle the entire island and create wide, shallow lagoons, which are as warm and turquoise as the water in a swimming pool. Most of the white sand beaches are on the surrounding small islands inside the lagoon, called ‘motos’.  Here our tour stopped for a scrumptious picnic lunch: It wasn’t your typical hot dogs and hamburger BBQ…our Polynesian guides prepared a beautiful buffet of fresh fish and fruit which we ate from hand-woven baskets made with palm fronds.   Another day, for a different vantage point, we decided to bicycle around Bora Bora.  This was definitely a more strenuous endeavor; it was the hot humid season & we felt like we were going to melt by the end of the 20-mile trip. 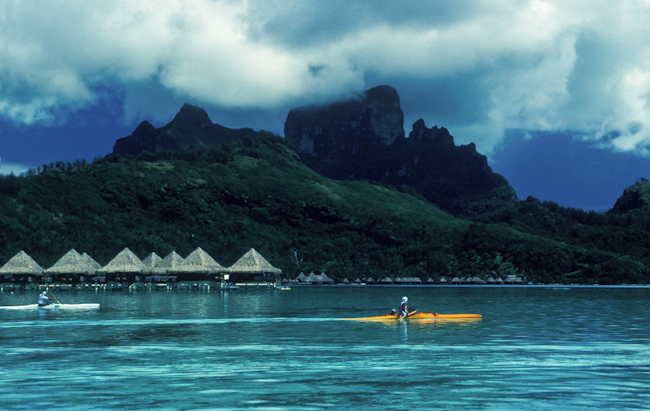 Kayaks next to luxury huts in Bora Bora

For nighttime entertainment we dressed up in our tropical shirts and pareus (a sarong skirt) and snuck into the big fancy resorts to watch traditional Polynesian shows.  Dale had a knack for getting involved . . . he was selected out of the crowd to learn to dance Polynesian style and a few nights later he was chosen to play a wooden drum, which he did with much better rhythm.

Maupiti – the smallest and most isolated of the Society Islands – is just a two-hour ferry ride from Bora Bora, so we decided to venture away from the tourist traps to experience authentic Tahitian life.   The island’s circumference is only 6 miles, so we rented a 2-person kayak and lazily paddled around the island. Many say Maupiti is like Bora Bora was before the tourist glut – quiet and unspoiled, a true picture of traditional Polynesian culture. We found this rumor true – and best of all everyone we passed during our brief stay returned our gaze with a friendly smile.

For our last 10 days in French Polynesia, we chose to relax in the ‘sacred islands’ of Raiatea, Taha’a, Huahine. To explore the large, sparsely populated island of Raiatea we took a personal tour with an American anthropologist. He explained how he believed that these islands are where believed to be where Polynesian culture originated and where migration began to Hawaii, New Zealand, and other South Pacific islands.  We went to an ancient mare (ceremonial site) and learned the significance of tiki idols (human-like statues believed to have mystical powers) and human sacrifices (which dictate the strongest warrior must be killed to ensure a victorious war). Raiatea has no sandy beaches, so we camped in a resort inside a coconut plantation. It was a peaceful setting until we tried to sleep: When the nightly winds picked up the coconuts began dropping all around our tent – we never did get use to the sudden thud!

Our best ‘bang for the buck’ tour in French Polynesia was a day excursion to and around Taha’a.  We toured a vanilla plantation where we learned that vanilla is produced from an orchid in a very labor-intensive process, and also enjoyed 80 proof vanilla rum samples. Next we stopped at a pearl farm and had a detailed demonstration of how Tahitian black pearls are made. Then we saw a few endangered turtles at a rehabilitation center where they were waiting to regain their health and be released to the open sea. We appreciated another picnic feast at a motu and after eating more than our share of BBQ fresh fish, fruit, and bread we went drift snorkeling. The small ocean inlet had a strong current, which allowed us to float past the coral and fish. When it was time to return to Raiatea we were surprised to be visited by a pod of dolphins that rode the bow wake of our boat – a great finish to our day.

The last island we stayed on was Huahine, an idealic place that epitomizes what everyone imagines in a South Pacific paradise; white sand beaches, lush valleys and mountains, plentiful fruit and flowers, and a charming port town with colonial buildings. We stayed at the remote southern tip of the island called Huahine-iti at an ‘eco-campground’. It was a beautiful setting but very rustic: The Polynesian family owned a botanical garden and provided us with free mangos, papayas, and bananas but no toilets or toilet paper – a cruel joke! .   Our favorite fruit was one we had never tasted – soursop – it had the consistency of cotton candy with a sweet honey-like flavor.  We also found an authentic French Polynesian restaurant that was definitely worth the splurge.

Our last night we stayed in pension in the town of Fare, treating ourselves to a night away from the tent’. We visited more maraes and a pearl farm by riding bicycles in the sweltering heat – Dale was not happy. Luckily, I finally found the perfect pearl earrings to end my quest and even Dale found a mother of pearl turtle necklace.

In order to cheaply get back to Papette from Huahine, we rode on a cargo ship, local style – sleeping outside on the deck for the 9-hour overnight journey. Budget traveling isn’t for everyone – our journey from Tahiti to Fiji wasn’t easy. After 10 hours in very rough seas, we arrived back in Papeete, Tahiti at 4:30 am. When the ship docked we quickly packed up our sleep mats and ran with our packs to catch ‘le truck’ before it filled up – the only transportation at this time of the morning from the port to the airport.

Now we had 21 hours before our 1:30 am flight departed for Fiji, so we killed time by shopping in the city – hot, humid and filled with exhaust fumes.  Finally, we boarded our plane for Fiji and thought the six-hour flight would be a chance to catch up on sleep. But two hours into our flight we had a stopover in the Cook Islands, and for some reason we had to exit the plan and wait for 90 minutes before we could board again. Finally we flew across the International Date Line (skipping Thanksgiving) and landed in Nadi, Fiji at 7:30 am.